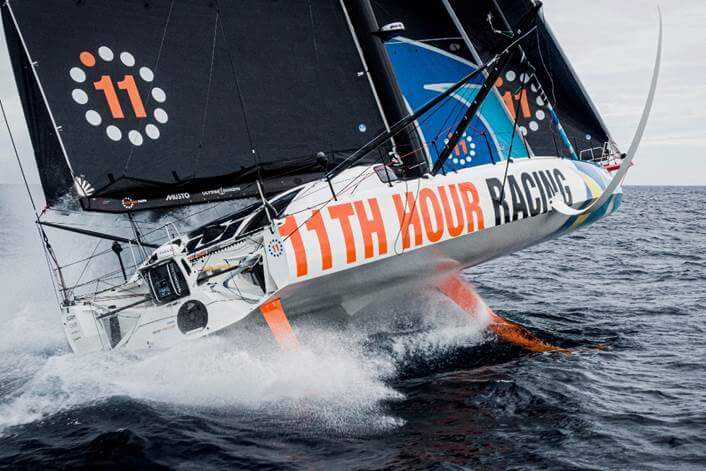 Last week, in Newport, Rhode Island, Luxury Swiss watchmaker Ulysse Nardin announced its partnership with round the world offshore sailing outfit, 11th Hour Racing Team, joining the team as the Official Time Partner of The Ocean Race. Since its founding in 1846, the brand maintains great heritage to the maritime world having designed and manufactured accurate mechanical marine chronometers allowing for precise nautical navigation and exploration.

In seeking to understand environmental issues, notably climate change, Ulysee Nardin and 11th Hour Racing team point out the urgency of the environmental impacts on our oceans.

As anthropogenic pressures such as climate change, pollution and overfishing affect marine ecosystems worldwide, corresponding changes in the chemical and biological features of ocean ecosystems threaten marine environments which in turn threatens the health of the species that inhabit them. Communication will play a key role in public outreach efforts about ocean health.

Today, Ulysse Nardin honors this tradition and passion for the world’s ocean seen both in its use of sustainable materials in the contemporary collections and through the brand’s partnerships.

The 11th Hour Racing Team is the only US team taking part in The Ocean Race 2022-23—billed as the \world’s longest and toughest sporting event. The five strong crew team is based in Newport, Rhode Island. And professional sailors are supported by an international shore crew. The sailors will race their foiling 60-foot race boat, Mālama, 31,700 nautical miles [59,000 kilometers, 36,000 miles] around the world through some of the most inhospitable waters on the planet including the notoriously tough Southern Ocean, inspiring positive action for long-lasting change for ocean health.

Patrick Pruniaux CEO of Ulysse Nardin North America, said, “11th Hour Racing Team is the ideal partner for our brand. Like us, they are explorers. We strive to innovate through use of novel materials that lessen our impact on the environment and 11th Hour Racing Team employs cutting edge technology that proves sustainability can win the race.”

Founded by Mr. Ulysse Nardin in 1846, the company owes its reputation to its links with the sea: A pioneer in innovative technologies and the use of high-tech materials such as silicium, Ulysse Nardin is one of the few integrated manufactures with the in-house expertise to produce its own high-precision components and movements. The brand is devoted in its quest to support the preservation of the Ocean.

11th Hour Racing Team founder, Mark Towill, commented, “Time is ingrained in everything we do at 11th Hour Racing Team. From the precise second we cross the startline of The Ocean Race, the hundreds of thousands of minutes we will be pushing ourselves and the boat on each leg, to the critical hour we are at in relation to climate change. We are proud to be carrying the marque of a sustainably focused brand such as Ulysse Nardin and look forward to our partnership on this epic race around the planet.”

The 11th Hour Racing Team was formed in September 2019 and is led by American offshore sailors Charlie Enright and Mark Towill. Supported by title sponsor 11th Hour Racing, the Team’s mission is to build a high-performance ocean racing team with sustainability at the core of all operations,inspiring positive action among sailing and coastal communities, and global sports fans to create long-lasting change for ocean health. Towill and Enright have competed in the last two editions of The Ocean Race and the team is set to race in the inaugural, fully crewed IMOCA Class of The Ocean Race 2022-23 with their next-generation race boat -Mālama.